Why GetApp is free

GetApp offers free software discovery and selection resources for professionals like you. Our service is free because software vendors pay us when they generate web traffic and sales leads from GetApp users.
Because we’re committed to help you find the right solution for your business needs, we list all software vendors on our website, and give them the opportunity to feature their solutions and collect user reviews.
At GetApp, our comprehensive software listings, verified user reviews, software evaluation scorecards, product comparison pages and articles will empower you to make confident and well-informed purchase decisions.

Velocify is a cloud CRM application that incorporates the use of telecommunications, email marketing, sales management, customer/staff management and calendar scheduling all within the one platform. From the user dashboard you can navigate to view live reports of sales activity and staff success rates both present and past. You can view custom reports as Velocify will automatically generate your preferred reporting and analysis criteria.

The built in sales algorithm within the application automatically allocates certain leads to specific members of staff and will notify employees via email or SMS. These leads are determined based on the priority of the client and the seniority of the member of staff. The software also recognizes customer telephone numbers and will monitor and record telephone calls for training and sales purposes.

A scheduling and calendar application is embedded into the software for all users to monitor and plan sales meetings, training days, appointments and contractual anniversaries. Managers can also use this tool to audit employee success and tracking as well as review client birthdays and special sales occasions.

Velocify is fully integrated with it's free to download mobile application. Once downloaded users can login with their credentials and view the entire backend of the software and database with complete transparency. Users can also add leads, edit leads, close leads, schedule meetings, edit events and contact clients/leads via SMS, email or telephone.

- Reporting and management: Velocify offers you the ability to view and customize real-time reports and allocates specific sales leads to certain sales reps.

- Automatic lead handling: The platform prioritizes sales and Velocify will send SMS or email notification prompting you of important leads.

- Integrated telephone management: Velocify can record sales calls and keep them on a database for training and referencing. The application can also facilitate call transfers and call conferencing.

- Mobile application: The mobile application by Velocify will all you to view all leads, both recent and historic, contact leads via email, SMS or call, edit and upload new leads, create events and sales email campaigns.

- Calendar and scheduling: A complete detailed calendar is embedded into the software allowing you to create appointments, allocate certain meeting times to staff, and view old appointments for training purposes. 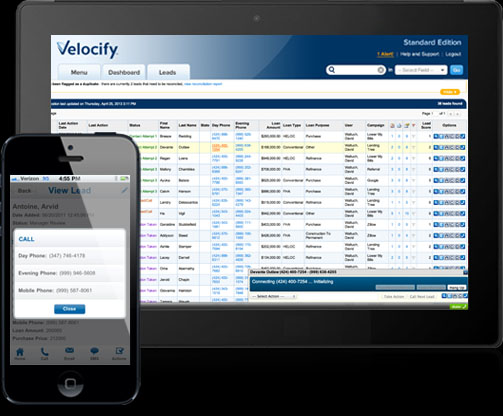 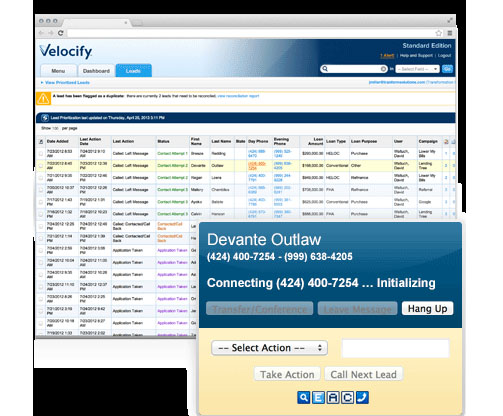 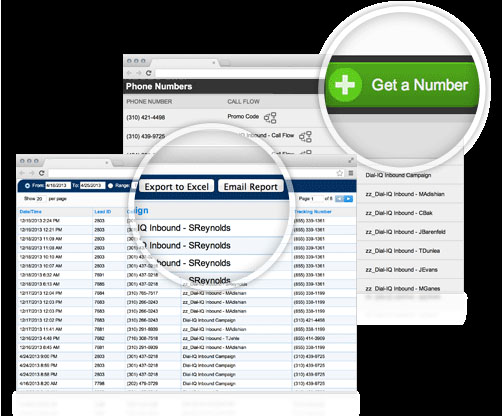 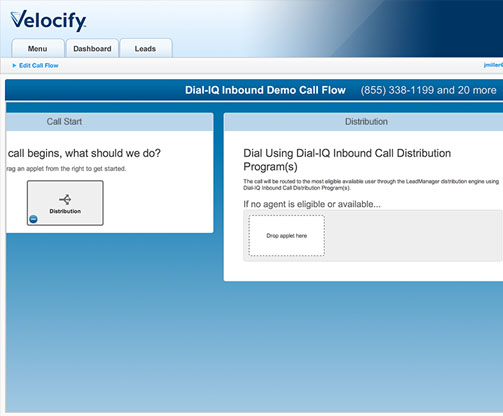 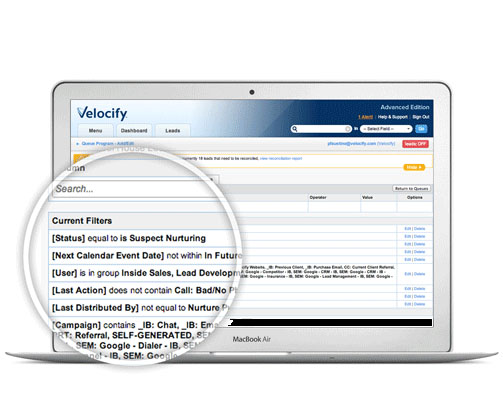 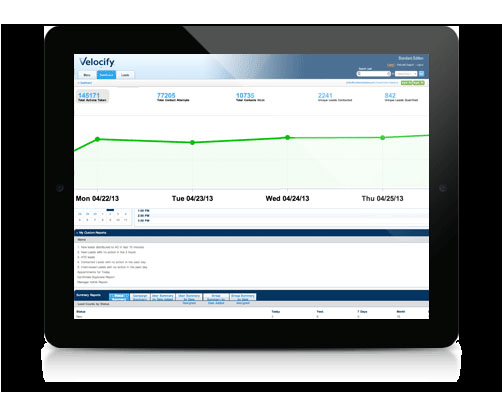 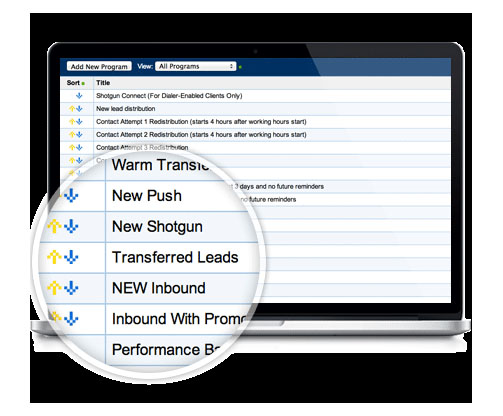 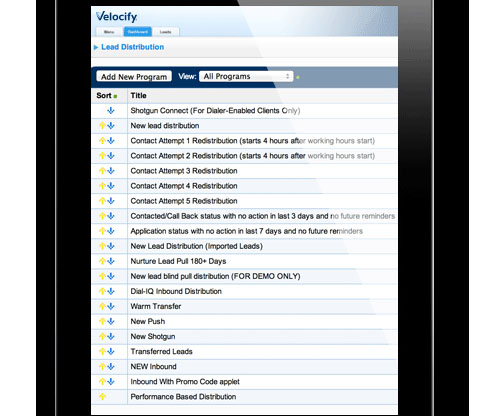 Great at cadence and keeping your organized.

The cadence is fantastic. Helps keep me organized with leads and integrates with other software. Very clean interface that's easy to understand.

I don't like that it can only have 100 leads at a time front facing. It also populates time zones internationally incorrectly. I.e. Australia leads pop up on Friday when it's Saturday down under.

Velocify demonstrates a deep and unique understanding of the fundamentals of lead conversion and the science which goes into it. The research, studies, surveys, and whitepapers behind their solution are extremely valuable resources that helped us implement and improve our best sales practices for optimal results. Specifically, LeadManager paired with Dial-IQ have helped us dial a new lead within seconds, positioning us to be among the first to contact a prospect, and as a result, we have achieved a 90% contact rate we were never able to achieve in the past. The custom and infinite automated lead distribution programs and methods allow us to create a unique and custom sales cycle for each marketing campaign with a combination of automated calls, emails, and SMS text to optimize conversions. This ensures that no leads fall through the cracks and continues to nurture our database. Velocify's performance-based lead distribution and lead prioritization have helped us leverage our best performers, pairing each lead with the most suited sales rep as well as prioritizing our leads to make the most out of both our leads' and salesforce's time and resources. Call scripts, automated emails, and SMS ensure that all sales reps presentations are consistent with our brand. The infinite reporting abilities make our data 100% transparent, allowing us to measure metrics and analyze data in ways we never knew possible. Results, along with Velocify's lead scoring feature, are instrumental in measuring and fine-tuning our contact and distribution strategies, as well as modifying and adjusting our marketing and buying strategy, saving us very valuable marketing dollars. The list goes on and on.

If I had to write something in this box, I would say that I can see how some users who are new to Velocify (or who are generally new to sales automation) may feel that certain functionality, such as reporting, distribution, or email capabilities may seem limited or difficult. It is absolutely the opposite, and I feel that Velocify should better educate its clients on how to truly uncover its full potential so that they can unleash its true power. Each of our businesses has unique needs, and the uniqueness of Velocify lies in its infinite customization abilities, which makes it fit each of our needs. Velocify comes built with the most basic, fundamental sales practices and reporting for the beginner. However, as your needs change and experience level expands, Velocify becomes the sales executive's and administrator's playground, a place where you can let your imagination run wild while knowing that automating almost everything is possible and easy. The reporting functionality and transparency's ability to inspect, modify, and fine-tune is second to none.

I signed with them sept of 2016, I was not told it was year to year, I didn't read every fine print on contract when I signed as I was in a bind at the time I had tried to set up another CRM and then afterwards they could not take leads from lead provider directly and I had to change quick, I did look at the contract but probably buried somewhere in fine print year to year.

I tried to work with them on this but I could not get emails to look right,

This is besides the fact that over in AEP all of a sudden on my internet leads if client put # for apt number then most of the lead info did not show, I spent 2 weeks in mid AEP trying to work with them to fix this but they never were able to fix this or explain why what previously worked no longer worked.

There were several other issues besides this and the customer service went downhill very much since they were bought out.

I called and spoke to a manager who told me I was in contract till sept, I told her of the issues I was having and that I was not told about this yearly contract but moreover I am no longer being provided with the services I was originally getting

She said no problem just send email to cancel and she would take care of it right away.

I did this but was charged again the next month, I emailed her what happened then she emails me my contract

I have been trying to get high up to managers, Mostly I get told I will get a callback but never do. but today I snapped and finally got a phone number to another manager and she gave final no regardless they will continue to charge through sept no matter what

I would urge anyone looking into this CRM to choose another

none none none anymore they will charge you full year if you cancel, even if they made changes that dont work for you

they will charge you full year if you cancel, even if they made changes that don't work for you. if you have an issue with it its very hard to speak with someone

Features, performance, and support are superb. Rarely experience downtime and the interruptions in service that do occur are resolved quickly. Very flexible system that can be tailored to exacting specifications and needs. Readily accessible support documents and instructional videos assists users in educating/familiarizing themselves with how to use system features.

Price can get prohibitive when adding additional features beyond the basic lead management functions. Per user fees and restrictive contract terms can leave companies with very expensive empty "seats" if the number of active users decreases (especially early in the annual contract cycle). Administrator seats incur all the same fees that basic users do even though few to none of the features being charged for are needed or utilized by Admin.

I am very happy with the software and recommend it.

I am very happy with the software and recommend it.

Velocify is that the program that works for you, based on your settings. For instance, I am able to make notes and follow up when the client wants to be reached as velocify emails you a reminder to contact them. I am also able to filter search results/settings based on how many times a client was reached or if they are non-responsive. Under each tab (based on your settings) you are able to enter quite a bit of information and required infomation in order for the lead to be saved.

Every so often I do see glitches here and there just like you would with any software, but the support team is very responsive and will guide you through the process of fixing any glitches that may arise. They are also able to do screensharing to fix any issue.

Showing 5 reviews of 229 Read all reviews

Q. What type of pricing plans does Velocify offer?

Q. What are the main features of Velocify?

We do not have any information about Velocify features

Q. Who are the typical users of Velocify?

Velocify has the following typical customers:

Q. What languages does Velocify support?

Q. What other apps does Velocify integrate with?

Velocify integrates with the following applications:

Q. What level of support does Velocify offer?